What is a Promise?

As mentioned in Mozilla docs:

Do we still have your attention? As always, the official description can be hard to decipher upon first glance especially for beginners. We hope  that after reading this article, you can come back to this definition and understand what it was originally intended to mean.
One aspect to note in the definition is that the word “asynchronous” is repeated three times. It suggesting that a Promise is something related to an asynchronous execution manipulation.
Before we get too far ahead of ourselves. Let’s take a step back to understand the difference between synchronously and asynchronously in programming:
When a program is first executed, it is combined with a series of tasks. 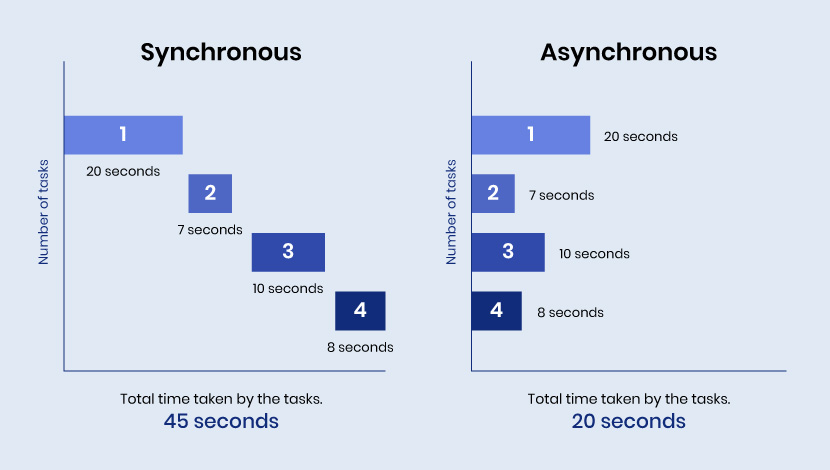 Many people may agree that synchronous programming is a quite complicated topic because it needs to perform careful and sophisticated techniques in order to control how things tie together when they’re occurring at the same time.
Because of this, if you’d like to make the process of working with asynchronous much easier, that’s where Promises were born and became natively supported in Javascript. This tool helps us to deal with controlling asynchronous tasks in Javascript.
But before diving into further details on Javascript Promises work, let’s consider the following scenario:

Imagine you’re at a restaurant having lunch and you order a set lunch with fried chicken, rice, and a salad.

Have you ever thought about the process of how they make the food and serve you your order? We like to think of it like this: There are three parties cooperating with each other to prepare your place of food. And let’s assume they operate in different parts of the kitchen.
The cook prepares the chicken, the sous chef prepares the salad, and the third person cooks the rice.
The flow or work can be abstracted like so:

In order to perform each step and to reach the final step of the whole project (i.e. bringing the plate to the customer), one must wait for the previous step to be completed. But the process of each job should not block the whole kitchen’s flow of work. The result of the current step may impact the next step to reach completion. In this case, the frying of the chicken must not block the whole kitchen’s execution.
For instance, in order to marinate the chicken, you have to thaw it first. And you have to have your chicken marinated with spices before frying or sauteing it with oil.
While the chicken is being made, the salad and the rice are also in the process of being prepared.
Javascript Promises manage tasks almost the same way the kitchen executes a job (frying the chicken, making the salad and cooking the rice). This is like asynchronous tasks in a program.
Enough about food. Let’s take these concepts to a real program.

What is a Promise in Javascript? 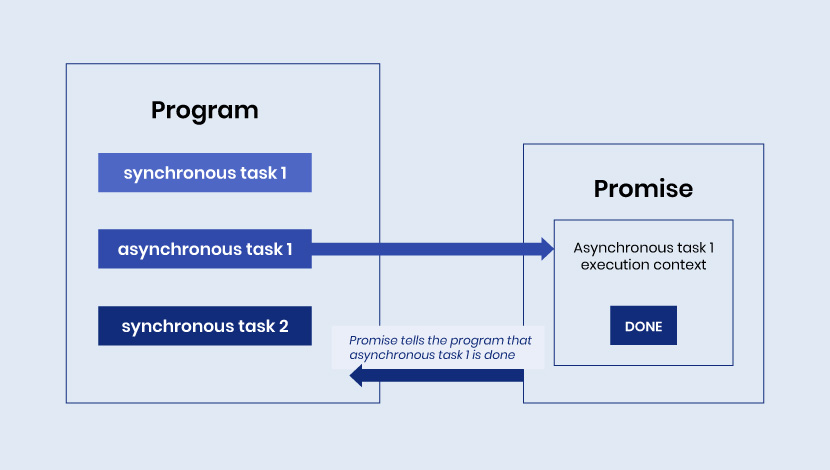 How do Promises work?

A Promise in its life will be in one of these states:

The created Promise object wraps around the asynchronous execution in order to moderate what is happening inside the executor.
Once it (the Promise) is declared, the executor is called immediately. The executor is called before the Promise constructor even returns the completed object.
The executor normally initiates some asynchronous tasks, and once they’re completed, if everything turned out ok, it then calls the resolve function in order to resolve the promise or else it rejects it if an error has occurred.

The object promise of this type of Promise has the method then(). This method takes two types of functions into its parameters.
One is a function that will be passed the resolved value of the Promise once it is fulfilled.
The other is a function to be called on if the Promise is rejected.
Consider the following example. Note that in this program, we assume that 1 second means 1 minute. And we use the setTimeout() function (kind of asynchronous) for easy illustration:

You can review a live example here.
If you change isSomethingWrong to true in the above example, you will see the error notified.


As you can see in the above example, the Promise has both a success and an error handler.
But what happens if the success handler throws an error? There’s nothing there to catch it then an error gets swallowed.
So that’s where the .catch() method comes into play. Simply, use it like this:

We recommend ending all promise chains with a .catch()!

This will output: “resolved!”

Because the .then() method always returns a Promise, we can chain ‘thens’ together in order to transform values or to run additional async actions one after another. These will be run in a queue which also control the flow of asynchronous tasks all together in an easy and natural way.

Output will be: “message to transform.”
In this example, when we have the message from the above Promise, we transform the new message to the next then as then transformedMessage by returning it in the previous then.


By returning an async task, we can also chain thens to run async actions in a sequence flow. This is an advantage of a Promise over the classical callback to avoid what many like to note as “callback hell.”

You can view a live example here.

By using chaining, the code looks so natural in lexical.


A Google search will explain that::

Because Promise.all returns a Promise, it is then-able. The returned promise is fulfilled when all promises passed to the all method have been resolved. This helps us to define an action to be performed when all promises are done.
Promise.all get rejected when any of the passed-in promises are rejected despite whether or not the other promises have been resolved.
And there you have it. Hopefully after reading this blog post Javascript Promises and Promises in general won’t be as intimidating as they appear upon first glance. We promise. 🙂

Think you have what it takes to join our exclusive network of freelance developers and programmers? Learn more about becoming a Pangara Talent today.